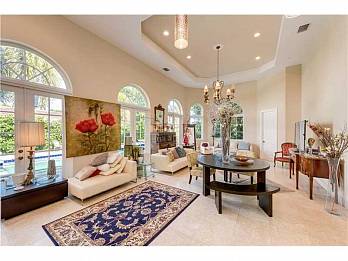 About Fisher Island Homes for Sale

Private island secluded paradise. Accessible only by ferry. Enclave to the wealthy and influential jet-setters of the world. Fisher Island real estate has no equal in South Florida, or for that matter, the rest of the Western Hemisphere. It stands in its own league as the most prestigious private island residence with its own ecosystem of luxury, convenience, and opulence. The community resides on a two hundred sixteen acre private island that was created in the year 1905 through a rigorous project of dredging the Bay of Biscayne and reclaiming land throughout the Miami Beach area. For nearly two decades, the relentless task of creating new island communities moved forward paving the way for some of the most desirable land in the United States. Fisher Island real estate for all intents and purposes was driven by Carl Fisher the powerful real estate developer with a grand vision and appetite for attacking his projects with incredible energy and attention to detail. Fisher originally purchased the rights to the property from another developer and later sold the land in exchange for a yacht owned by the Vanderbilt family. Through the years there have been many changes of owners with the most significant turning point for the development taking place within the nineteen eighties when Spanish-style grand estates where built with stunning design and architecture to historically match preliminary vision for Fisher Island real estate. To this date, the island is seen as an aristocratic fortress for those desiring extreme privacy, much like the original intentions of the Vanderbilt family. However, unlike the past, the island has evolved housing every possible convenience that its residents may ever need on the island, without ever having to go into the mainland if that is their choosing.

Fisher Island real estate is grand, luxurious, and multidimensional. The community has it all...mansions, condos, hotels, marinas and even an observatory. The island even has its own dedicated zip code, which by the way, has been named as America's most exclusive zip code by Forbes magazine. For those lucky enough to live in 33109, privacy is out of this world. In addition to the ferry access, residents can commute to the mainland via their lots and helicopters. The area has the look and feel of a protected national park or sanctuary. With the endless dining and entertainment options of South Beach being only a short ferry and drive away, Fisher Island homes offer the best of both worlds in an incredibly unique way. In addition to being the most exclusive community in the USA, the island also has the honor of having the highest per capita income in all of North America. So who lives on Fisher Island? A multitude of celebrities has called Fisher Island home. Fisher Island residents include the amazing entertainment and personal improvement icon Oprah, the German tennis champion Boris Becker and Hollywood icon Mel Brooks.

Many of those that have bought a Fisher Island home have done so partly because of the exceptional education offered right on the island. In the year two thousand and four Fisher Island Day School was founded and has since become one of the most well-respected educational institutions in all of the Northern Hemisphere. Schooling here can begin at two years of age. That's not a typo, yes; a Fisher Island education can start at year two with the program running through fifth grade. However, the program does not come cheap with tuition extending north of fifty thousand dollars per year in some instances. The unique school is open to both to the island residents and off the island residents, as children from the families of the neighboring private islands of Star Island and Palm Island often gravitate to the out of this world educational offering. There is no doubt that this type of offering helps to make Fisher Island real estate incredibly desirable.

And if the education and privacy were not enough, the island also has a hotel to accommodate resident's guests without having to stay in the homeowner's homes. The Fisher Island Hotel and Resort offer magnificent hospitality including fine dining, a marina, golf, tennis, a fitness center and private beach access. The lush landscaping is nothing short of breathtaking and feels like paradise. Being a private island accessible only by boat has its privileges. It allows for golf carts and bicycles to be the preference for moving around the island. The old Vanderbilt estate home is now used as the clubhouse to the community. It is every bit as luxurious today as it has been in the past. The community even has its own bank, fire station, spa and abundant shopping options for its residents.

Fisher Island real estate is predominantly comprised of condos. However, there are a limited number of homes that are available on this page. These houses rarely go on the market, and when they do, they are quite high in demand due to their scarcity. There is never more than a few hundred people living on the island at once as many of the island's residents call Fisher Island their fourth, fifth or sixth home. The summer months are especially peaceful and tranquil with mostly staff occupying the island. The yachts docked in the marina are often some of the most magnificent vessels in the world with the latest body and interior designs. They are the perfect addition to buying any home in Fisher Island and make for an incredibly convenient golf cart ride away from their owner's homes on the island. In the past the slips have sold for over two million dollars each, some of the highest slip prices ever sold in the United States. Residents from Brazil and Russia, in particular, have a fondness for the island along with ultra-affluent Ne Yorkers.

Discover your new dream home through browsing our single family home listings above. If you are interested in condos, feel free to go to our Fisher Island condos page. Make certain to contact us today to arrange your private tour of the island and the available homes for sale. We'll give you every possible option including some options for off-market properties that are not marketed to the public by their owners for a variety of different reasons. Live in this unique private paradise!