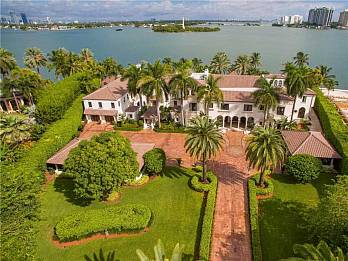 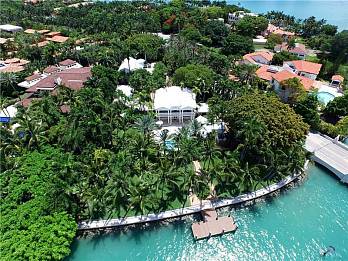 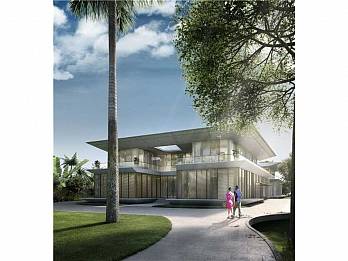 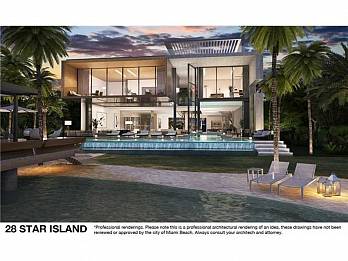 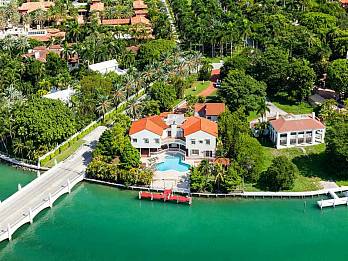 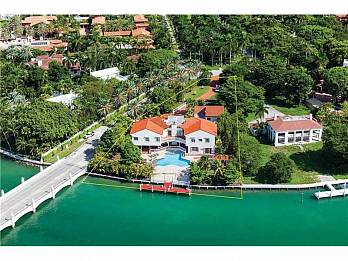 Yes, this is THE STAR ISLAND Miami Beach FL. Hideaway for the rich and famous. Property here is more than just beautiful views and fascinating neighbors; it’s a symbol of true status. This community houses lavish mansions on oversized lots – each and every one of them with absolutely breathtaking waterfront views. Containing only 34 lots, the ultra-exclusive private island offers a lifestyle that is simply incomparable; it is the best of the best. And each lot begins at 40,000 square feet, making the entire community a neighborhood of luxury estates.

The pristine waterfront location makes boating easy. Homes within the neighborhood enjoy the benefits of expansive dock space in their backyards. It’s common to see magnificent yachts docked directly behind incredible mansions. The ample lot sizes also give way to stunning pools and landscaping that bode well for entertaining. And Star Island Miami is world-famous for the parties and events thrown by their residents. New Year's Eve and other holidays come to life within the community like no other island in Florida. It’s simply an amazing environment. Famous residents with a flair for extravagant parties have included P-Diddy, Madonna, Gloria Estefan, Shaq, and Kanye West.

Residents feel quite assured that their homes are protected at all times with a constant security presence at the guard gate entrance. Star Island real estate is considered to be incredibly valuable; in fact, many consider Star Island Miami as one of the most prestigious addresses on Earth. Residents understand this and have spared no expense in outfitting their estates with incredible finishes and architectural features. The lush landscaping throughout the properties is simply a beautiful sight to take in and appreciate. With the perfect location as the closest island to South Beach, Star Island homes offer the difficult-to-find private lifestyle while still being minutes away from the incredible dining and nightlife options of South Beach. The MacArthur Causeway also connects the community to all of the happenings of downtown Miami seamlessly.

In looking at some of the most valuable properties in America, Star Island real estate reigns as the supreme trophy asset and spot to live for the world's rich and famous. The sheer amount of wealth that congregates on the island is incredible. It's so popular that Miami has its own lucrative boat tours that specialize in touring these spectacular waterfront mansions. On a daily basis, the general public enjoys the tours encircling the island and marveling at the billionaires and celebrities that live on the island.

Rumors come and go with the latest speculation on the luxurious island's residents. So that begs the question of who lives on Star Island exactly? The list begins with the legendary Gloria Estevan living on 1 Star Island, which is currently listed on the market for $40,000,000. Even if the house is sold, the Estevan's still plan on living on the island at another one of the residences that they own at 39 Star Island Miami, which is a beautiful 2-acre estate. The Estevan's originally purchased the home in 1993 for just under $2,000,000, and they are expecting a very nice return on their investment. It certainly pays, in the long run, to live on the most expensive island in Florida.

7 Star Island is owned by Stewart Miller the CEO of the powerhouse development company Lennar. The mansion has ten bedrooms and 11 baths and is approximately 10,000 square feet with beautifully maintained landscaping on the property. Since Stewart is a home builder, this property is no doubt an example of what a billionaire's home should look and feel like. Recently there has been quite a bit of news surrounding Miller and his plans for further development within the community, and he seems to be quite well capitalized to do so. In 2015, Miller was paid compensation totaling $17.9 million for his position with Lennar. Miller is looking to combine three lots within the community to form one mega-compound like nothing seen before among residents.

The new property would encompass nearly three acres and the city of Miami Beach is currently reviewing his proposal for variances in lot size and home size. With a property over 120,000 square feet, it will certainly be an eye-catcher. He has proposed a two-story mansion that would include subterranean parking for over 30 spaces, berthing for a super yacht, a magnificent lagoon, and waterfall, along with other essentials like a motor court to display classic, rare vehicles. There would be multiple guest houses on the property along with an art gallery multiple kitchens around the 70,000 square foot mansion. Could this be the Miami Star Island Beach FL home that ultimately breaks the $100,000,000 threshold? One could assume it could if approved.

5 Star Island is owned by the South Beach legend Thomas Kramer, who over the years has been known for his decadent parties. He is the one the virtually singlehandedly gave Star Island Miami the reputation of prestige. To get into one of Thomas Kramer's parties was no small feat back in the 90s, and it still is today. We had the pleasure of attending one a few years ago, and the level of beautiful (both from models and interior and exterior design) was amazing. With 13 bedrooms and 12 baths the property is fit for a king. And for Thomas Kramer, Star Island certainly fits into the role quite well as a palatial neighborhood to call home. The mansion is available for rent for a mere $150,000 per month, and this price has not kept many renters out of the market.

21 Star Island is the home of billionaire Philip Frost. The mansion is a whopping 37,000 square feet in size, and the property is a gorgeous showcase of some of the most beautiful landscaping on planet Earth. With a lot that is nearly six acres, Mr. Frost certainly has a home that is fit for entertaining royalty. He made his fortune in the pharmacy business and had made a stellar investment in having one of the most admired Star Island homes.

29 Star Island was once owned by the ultra-famous shoe and fashion designer, Donald Pliner. Former Ambassador Paul Cejas is the proud owner of the Moroccan-styled home. The property stands over 10,000 square feet and has five bedrooms and nine baths. The towering ceilings inside the residence gave way to a gorgeous open floor plan. The front door to the mansion makes quite an impression as it looks fit for a Prince of Persia.

30 (and 31) Star Island Miami Beach Fl is owned by Wayne Holman .  He is the owner of a powerful New York hedge fund, Ridgeback Capital Management. Wayne had a fine eye for new construction quality and purchased #30 as a newly constructed spec house. He and along with his wife Wendy acquired the home in 2014. The homes both have lush landscaping and gorgeous waterfront views.

33 Star Island is owned by Gerald & Joan Robins. They are the parents of the powerhouse developer Craig Robbins, who is developing most of the Design District area currently. The 10,000 square foot home sits on over 1.3 acres. The family has owned the property for over 40 years, making them the longest continuous residents of Star Island.

The community is the ultimate status symbol for exotic, waterfront living. It's never too late to make a purchase on the island, though. Lots #1, #28 and #45  are currently on the market beginning at $17,000,000. With the rate of property value appreciation of the neighbors, those prices might be a bargain in a few years. So contact us today to see any of the properties listed within Star Island Miami. Your private tour of the properties will be an adventure in fine design and architecture. The best of the best.